In my workout class last week, the circuit included depth jumps. This involves jumping up onto a series of sequentially higher boxes, ending with the last box, which is 32” high. The instructor’s disclaimer: “if you don’t feel comfortable with any of the boxes, step out of the sequence whenever you’d like.” As our 5 teams of 5 people proceeded through the circuit, guess how many men opted out before the ginormous box at the end? You guessed it: Zero. And how many women opted out before the last box (or 3)? At least one-half.

As I observed these women opt out of finishing and go back to start over with the low, easy box jumps, I reacted quite strongly. I thought: “Why aren’t they even trying? What’s the worst thing that can happen? You fall a very short distance onto a soft, padded box? Didn’t we used to do that for fun as kids?”

I was trying and awkwardly landing on a knee or just sliding off each time. But at least I was trying. I wanted to say, “look at me, I’m 5’3″ (63” and the last box was 32”) and looking silly trying to scramble up there. Join me – it’s exhilarating to try.”

My frustration with my female classmates’ reluctance to try remained with me the entire day. By 5 pm, I was still super fired up, and shared the experience with my WATS™ colleagues. I was so keen to understand what had caused these women not to even try. My colleagues and I mused: Did they not want to hurt themselves? (Virtually impossible considering the materials involved.) Did they not want to be embarrassed? Or were they scared to fail? It became clear to us that there are many reasons women choose not to try to jump onto the highest box.

I was reminded of Brene Brown’s famous revival of the Teddy Roosevelt quote:

“It is not the critic who counts; not the [wo]man who points out how the strong man stumbles, or where the doer of deeds could have done them better. The credit belongs to the [wo]man who is actually in the arena, whose face is marred by dust and sweat and blood; who strives valiantly; who errs, who comes short again and again, because there is no effort without error and shortcoming.”

Or the pop culture, TLDR equivalent: “You can’t win if you don’t play!”

Resilience, tenacity, grit, the essential ingredients of successful entrepreneurship are muscles to be flexed and grown. How can we grow in one area of our life (business)? and not try in another area (fitness)?

And so, next time our trainers set up a box that looks too high, not only will I look silly scrambling up onto it, I’ll ask my female classmates to look silly alongside me. And one day, one of us will land it.

The good news is that as women, we are by nature gatherers, community-builders, and supporters. So, let’s use this natural instinct to lift each other up. Right now, today. Next time you see a woman holding back and not trying for the highest task, whether in workout class, at the office, on a committee: gently encourage her to try. Better yet, try alongside her. When we all start encouraging each other, imagine the effect that will have. One day – sooner than later, I’d bet – one of us will land it – the highest box, the promotion, the raise. And then the box won’t look so high.

So let’s try, but try together. Imagine how much easier the box jumps will be if we look at each other and say “come on, I know these are hard, but I’ll try with you.” That way, if we fall, which we will (those boxes are damn high!), we’ll be there to laugh it off, pick each other up, and try again. 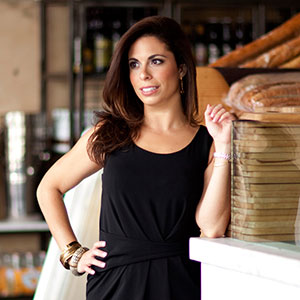